So, it seems most houses around here don’t have a washer and dryer, and The Little House is no exception. There aren’t places to do your own laundry either. You take your clothes to a lavandería and if you’re organized enough to get them there in the morning, they’ll be done in the evening. I think we’ve seen numerous such establishments in our limited time here, but luckily for our decision making process Raul recommended one that he used.

We (or at least I) seem to assume everything here is going to be hard because we are still learning the language, but as it turns out getting clothes washed is pretty easy. This morning Randi and Kress dropped the clothes off and without too much trouble got a number (11) and were told they would be ready this evening at 7pm. Easy as pie.

Randi and Kress headed off to play Ultimate and I stayed behind for a meeting at work and just as I started making dinner about 8pm realized that I had forgotten. Luckily, we’re in Uruguay and the Lavandería is open until all hours of the night. When I got there with our laundry bags and the ticket our clothes were in fact ready and packed into 6 bags about the size of a pillow each, to ensure that the folding they had done wasn’t lost in transport. Incidentally, their ticket book was on 25 and washers and dryers were still running so there was plenty of action after our clothes were dropped off. 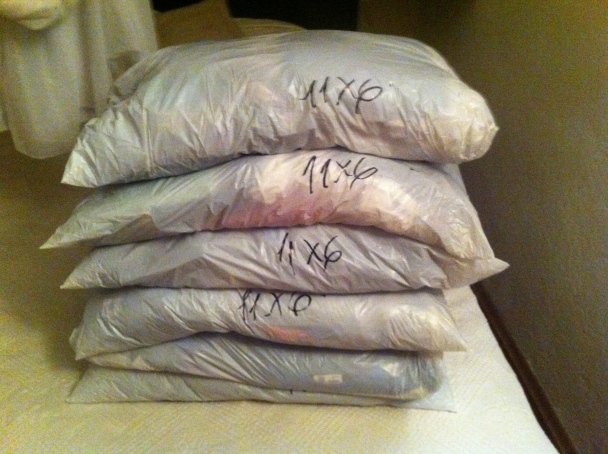 After convincing the husband and wife team that the clothes would in fact fit in the bags (I trusted this was the case since Randi and Kress had transported the clothes this morning in the same bags) they relinquished our laundry and accepted my payment.

It seemed that was the test, after which, we were best friends. The guy behind the counter started asking me a few questions. Apparently, I hadn’t mangled the previous conversation enough to convince him that I was, perhaps, not the best target for conversation. He learned a bit about where I was from, or at least I think I communicated it pretty well. Upon learning I was from the US, he complemented my Spanish. I responded that I was just learning and he said, “Obviously, but it’s much better than my English.” I beamed and ducked out on a high note.