Last weekend Asa and I and Asa’s mom, Merrill, went to the World of Nations Celebration here in Jacksonville. The festival has been in existence for a good 20 years and is a great place to go and experience some 30 different international cultures. Each country was set up in their own tent where they displayed crafts and doo-dads for sale, sold authentic (for the most part) food, and stamped passport documents given to each visitor. A main stage central to all the countries exhibited entertainment and ceremonies from each country and local stages had live bands or dancing.

Each year the World of Nations Celebration is open on thursday and friday for elementary and middle school students to come learn about different cultures. Asa fondly remembers going to the celebration when he was a little tyke.

We had a great time wandering around, sampling local cuisine, and people watching. We even got to sample some empanadas from Colombia which were very different from the ones we had in Uruguay. 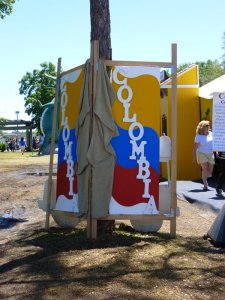 Some fun facts we learned:

– The Ethiopian calendar follows the Julian calendar which has 12 months of thirty days each and a 13th month of 5 days. The calendar is 7 years and 8 months behind the Western calendar.

– The Taj Mahal only took 17 years to build with workmen working every single day.

– Nollywood is what Nigeria’s booming film industry is called.

– The South Korean flag has a representation of yin and yang surrounded by depictions of the four elements: heaven, earth, fire and water. 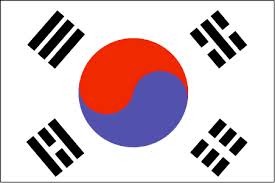 – Angel Falls in Venezuela is 19 times the height of Niagara Falls.

– The new friends that we’ve made.

– Being able to pay for everything in one location. Paying bills, charging cell phones, and buying tickets to events can all be done at the Abitab. And there is never a shortage of Abitab locations.

– Well behaved dogs everywhere. They don’t harass people, they run around without leashes, and they even know how to cross the street without getting run over (which is sometimes challenging for their human counterparts).

– Lack of excessive rules, regulations, and safety measures. People generally seem to be smart about what they do like driving, walking down sidewalks laced with construction, or traversing near open windows in 9th floor apartments.

“An empanada is a stuffed bread or pastry baked or fried in many countries in Latin America,Southern Europe, and parts of Southeast Asia.” – Wikipedia 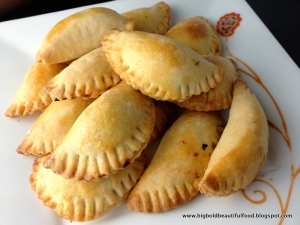 Here in Montevideo all the empanadas we have run across have been baked instead of fried. Across the river in Buenos Aires they have baked empanadas that they call “salteñas”. Empanadas are available at a variety of venues in Montevideo. At the supermarket they can be found near the bakery items. Empanadas can commonly be found at rotiserías that also sell fresh pasta and torts, and occupy little hole-in-the-wall stores that are hardly big enough to display their food. Empanadas can also be found at empanada specific restaurants or delivery centers.

At supermarkets and the small rotiserias the fillings are fairly limited and usually include carne (beef), pollo (chicken), acetuna (olives), jamón y queso (ham and cheese), and espinaca (spinach). At empanada restaurants and delivery centers there is much more variety, including dessert empanadas. El Taberna del Diablo (a restaurant and delivery center near our house) has 46 different kinds of empanadas.

One of the confusing things about buying empanadas, especially if you get different varieties, is coming home to a collection of stuffed pastries that all look alike. On closer inspection, each type of filling is shown on the outside using a unique marking. Small rotiserías will sometimes use pieces of dough to make shapes on the tops that correspond to their filling. Large delivery centers will use a combination of small holes punched in the edges and folded corners to distinguish the fillings. Though, without a guide map to the markings, the only thing to do is take a bite. Things could be worse! 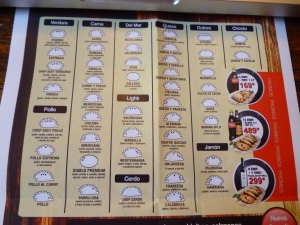 Empanadas are so prevalent in the culinary sphere of Montevideo that most supermarkets carry pre-made empanada dough disks. All one needs to do is buy them, stuff them, and bake them to have a delicious snack or entire meal.

So, that’s exactly what we did! I made two types of empanadas, beef and apple. Below are the recipes that I created:

2 peppers chopped (don’t know what kind, they call them “picante” here but jalapeños would work great)

2. Add meat, tomatoes and seasonings. Cook until meat is browned and broken into very small pieces.

3. Cool mixture in the fridge for 1 hour, then add one spoonful to the center of a dough disk. Wet the edges of the disk with your finger and then fold over and seal. There are lots of different ways to seal empanadas including with a fork or with a braid. This video shows how to do it using the different techniques.

4. Brush the tops with egg yolk to help brown them in the oven. Since the oven here is a bit funky… I’ll just suggest that at home you bake the empanadas at 350 F for about 15 min.

1. Place the apples, margarine, and sugar in a pan and sauté over low heat. When the apples are soft, add the flour to thicken the mixture. Off heat add the dulce de leche and mix.

2. Place in the fridge for an hour and then fill the empanada disks with goodness! Use the same cooking instructions as above. Enjoy!