When we bought our house, one of the huge draws was the amazing sunroom connected to the living room and opening out onto the back patio. The sellers had it decorated with a nice comfy couch, rug, coffee table and a high top table to eat at. It looked like the perfect little nook and hang out area.

When we moved in we quickly realized that this “sunroom” did in fact have a lot of sun and in Georgia during the summer, that means it gets really hot. Correspondingly, in the winter it gets really cold. This really isn’t a result of the amount of sun the room gets, but rather that it isn’t connected to the house’s central air and isn’t sealed (i.e., we can literally see the sky at the corners where the brick meets the sunroom walls). The sunroom was in fact sealed up at some point, but the caulk has long since become brittle and broken away from the little nooks it was shoved into.

For us, the room turned into a spider and cockroach heaven and a place to keep some plants. Maybe if we were feeling industrious and the weather was nice we would clean up and play some games at the free table and chairs we had there. It wasn’t a horrible place when it was clean, but it just wasn’t being used.

We started tossing ideas around for remodeling when we realized that we had an extra full-sized couch coming our way that wouldn’t fit in the house proper. Those ideas spiraled into ideas of putting in new flooring, french doors, tearing out the walls, putting in skylights, etc… We were giddy with ideas.

Coming back to reality, we decided that we would start small and wanted to make sure that we actually use the space before we go all the way with remodeling. Picking up our couch and having a UHAUL rental for a couple of days, we took the brave step and made a bee-line for IKEA (love that place).

We put our free table and chairs and the old, but not horrible, couch we have had for years on craigslist and put them out at the curb for free. The table and chairs were gone in an hour. The couch is still there. Can’t really blame them. It’s not that fantastic.

Our newly picked up couch joined a new coffee table, rug, some lamps, curtains, a lot of caulk, and a couple of kitchen islands repurposed into a bar and we have a “new” sunroom! 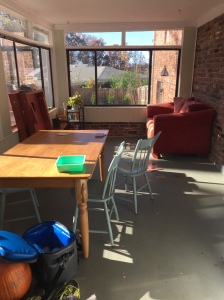 After – curtains and caulking still need to be done