We found ourselves in a Spanish speaking country again last week, although very temporarily. Our visit consisted of a lot of ultimate, some relaxing, and reconnecting with some of our Uruguayan friends. Seeing them and chatting made me remember the joy and pleasure that writing this blog gave me when we were living in Uruguay and beyond.

I have decided to re-kindle my relationship with the blog. In reacquainting myself with the blog I noticed that I had several drafts of half finished posts. It seems that the longer I neglected sharing our adventures, the more burdensome it felt to catch everyone up. The end result was just a void. So… that being said, I’m not going to try to catch you all up. I’m just going to jump right in!

We (the husband, the roomie – yes the same one from Uruguay, and I) traveled to Cancun, Mexico the week before Thanksgiving to participate in the Panamerican Ultimate Championships. It is a 4 day tournament  of teams from North, Central, and South America competing, coexisting, and interacting in the wonderful world-wide ultimate community.

I was playing for a master’s women’s team from Atlanta, the Atlantiques! Yes, I know the name is awesome 😉 The husband and roomie played with Team Uruguay. They could only field a men’s team so I was out of luck, but that’s okay. It was the first time in about 4 years that I have played on a women’s team and it was a blast! We won the third place trophy in the women’s division with 14 players all over 30. For those of you who can’t quite grasp the awesomeness of this feat, just picture a small number of slow ladies schooling an army of 20 year olds for nine games over three days. Experience counts!

The Uruguay team almost made it to the quarterfinals, but a weird three-way tie in the pool threw them into the bottom brackets. It was disappointing, but everyone just seemed happy to be there and playing! Watching my old friends play made me super happy. They have come so far in the three years that we have been gone and it’s really gratifying to know that we have had a part (and continue to have a part) in their development and growth.

The weather was awesome in Cancun, especially for all those teams from Canada! The fields were really great, although they got a little muddy after a downpour on the second day. The only complaint I have, and I hear this is pretty common for international WFDF tournaments, is that the field site was really far from the lodgings and the arranged bus service was limited. All this basically meant was that we went to the fields in the morning and came home at the end of the day. This usually isn’t a horrible thing, but the AC of a hotel room is awful nice in the middle of an 85 degree F, 100% humidity day. We just kept telling ourselves… “We’re in Cancun! Life could be a whole lot worse!” 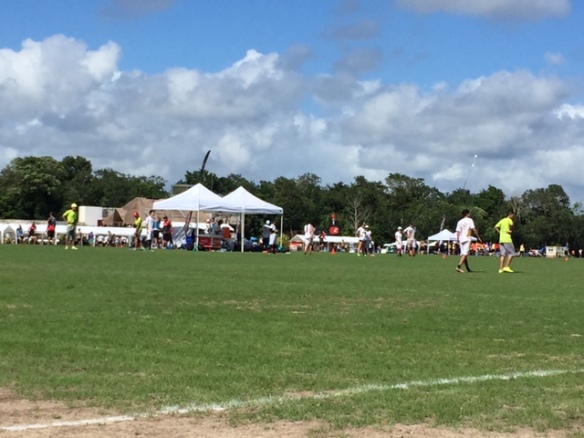 All in all… A fantastic experience and one to be remembered!