This year Asa and I were privileged to be a part of the Light Parade here in Jacksonville. It is a festival of sorts where local boat owners decorate their boats with lights and parade them around the St. Johns River in downtown JAX. The parade of boats is then followed by one of the best fireworks shows of the year. There are competitions for a variety of boat classes to see who will take home the prize. Rumor has it that in past years the prizes consisted of boat motor oil. While not a very glamorous prize, it certainly is practical!

Anyway, Asa and I were commandeered to help out in the boat of a family friend. She ingeniously decorated her boat in lights shaped like an octopus and needed help moving legs (yes a lot of legs!) and changing colors of the remarkably large octopus body.

It was certainly a site to behold from the dock and close up on the boat, but was even more astounding in videos taken from the shore. 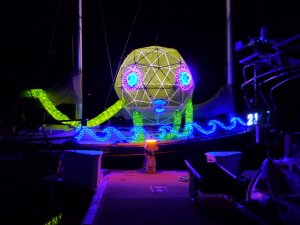 “Octopus’s Garden” by the Beatles was also on repeat and blaring from speakers on the deck of the boat, hopefully loud enough for those on the shore to enjoy.

Check out this awesome video of the light parade on youtube!

It was a fantastic night out on the water! Oh yeah, the octopus won first place in the sailboat category!