Yet another adventure to blog about while my parents were here! We decided that it would be nice to take the bus up to the area around the Prado. This is apparently an old and affluent neighborhood in Montevideo that boasts a very nice and large park, rose garden, and the botanical gardens.

The gardens are nicely arranged into areas of flora from certain parts of the world and specialty areas. Our tour took us around the outside of the gardens. Our first stop was the greenhouse that housed numerous potted tropical plants. The pots and their plants were so uniform that I wondered if they raised them in the greenhouse and sold them at the local markets once they were big enough.

Next we walked through some of the different regions of the world including: Africa, Uruguay, and Japan. The gardens have signs for most of the flora, but the writing on the signs near the walking paths were either worn away or scratched off (one of the downsides of free entry). We found a nice climbing tree, which Asa made short use of.

We then found ourselves wandering through a collection of medicinal and “utility” plants, which included aloe, rosemary, oregano, and lavender. The lavender was especially attractive because of the butterflies.

They also had a section for water plants, which contained some cattails and some very beautiful black and neon orange koi. The fish were clearly used to someone feeding them, as they followed us when we wandered by. 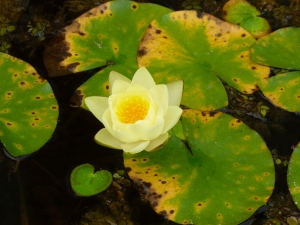 There is also a museum on the grounds, but it was closed for renovations. After we made our way back to the entrance, we relaxed on some benches and enjoyed the relative quiet. The botanical gardens would make a great place for a picnic, or just a nice walk on a sunny day!