Saying that I have been a little scared of using the oven here might be an understatement. It’s a gas oven, the likes of which I haven’t dealt with in the last 8 years. It’s also about half the size of any oven I’ve ever dealt with. The biggest “scary factor” about this oven is that the posted temperatures are all in degrees Celsius with the lowest temperature equating to about 400 degrees Fahrenheit. This was all very confusing to me, but this weekend I overcame my fears in the name of cookies!

1. There is no brown sugar. It just doesn’t exist.

2. There are no chocolate chips. They just don’t exist.

3. Baking powder comes in a baggie… luckily with big red lettering or someone would think we had a lot of drugs in the house. In fact all spices come in little baggies unless you want to pay twice as much and buy McCormick’s.

Some things about cookie making in The Little House… 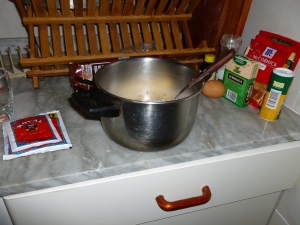 2. We don’t have a cookie sheet. I think I used something made for pizza dough. 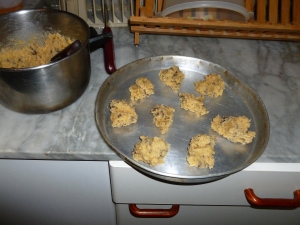 3. We don’t have measuring cups or spoons. I used a drinking cup and a regular spoon.

So, how did I accomplish this obviously arduous task? Well, I collected all the ingredients from the store including a very large Hershey’s dark chocolate bar. It was just as good as chocolate chips once I broke it all up into little pieces. 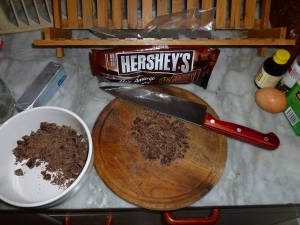 Everything got mixed and put onto our pizza tray and into the oven it went. I set the oven to the lowest temperature setting hoping that I wouldn’t burn the crap out of my cookies. 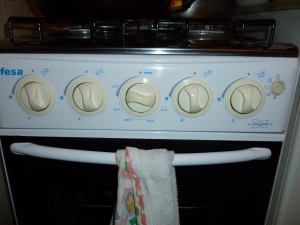 The first batch took forever to cook. The second batch I got tired and lazy so I didn’t even try to make individual cookies. I just spread the dough out in the pan and made one huge cookie. I also turned the oven up thinking that somewhere in the middle was probably a good cooking temperature. It makes me wonder if my temp conversions were wrong (I did check twice), the gas just doesn’t heat up all the way, or if someone had a good laugh putting the wrong temps on the knob.

I also repeated the baking experiment a couple days later by making an apple crisp which turned out delicious.