It is fairly common here to be able to rent out a space with some kind of kitchen facilities for parties or meetings. This is what the board gaming group does and what I assume Carlos’ family did last night.

We had our directions; the corner of Blvd. something Artigas and Colorado… Go past the fields and ask for Glorieta. So we walked down the street to catch the bus. We managed to get off a couple stops too early, but I guess that’s better than too late. We walked, we saw the fields, we saw a gate, we saw the guy in camo gear guarding the gate, and we kept walking. We got to the corner of Blvd. something Artigas and Colorado and knew we missed something. We called Carlos. He sent his brother Juanma and friend Ale to come and collect us.

Apparently we were suppose to stop at the gate and ask the camo guy about Glorieta. Turns out Glorieta is NOT a person. It’s the name of the little building where the party was. Go figure!

The party was great. I imagine there were about 40 people including friends and family. There were lots of snacks, along with beer and coke (both staples in Uruguayan dining). Some of the snacks we hadn’t seen before… Faína, which is a garbanzo flatbread that is sometimes placed atop pizza (called pizza al caballo). Maní, which are peanuts, but these had some kind of hard salty outer coating on them which reminded me of a corn nut.

When the majority of people arrived (probably around 10:30 pm) Carlos started the karaoke singing. It was very apparent that this might just be his favorite thing to do other than play ultimate, but unfortunately I haven’t gotten any good pictures of him doing either. I must say that karaoke in spanish was much more enjoyable in english, but that could have been the beer talking! 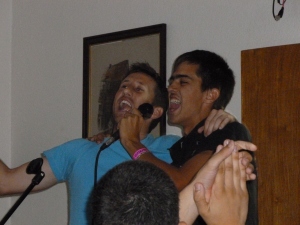 Matt and Juanma singing "We are the Champions" by Queen... Reminiscing about their recent win at a beach tournament in Monte Hermoso.

Juanma and some of the other frisbee boys enjoying themselves.

In the middle of karaoke there were hamburgers served. Then there were games. I guess the TV show “Minute to Win it” has gained some popularity here, so we played a variety of minute to win it games. These included: stacking bolts into a tower using a skewer, balancing a tower of 5 apples, bouncing a spoon into a cup, and moving  a cookie from your eye to your mouth without any hands. Asa and Matt both succeeded in making bolt towers and I dropped my cookie on the floor.

Asa and Carlos playing a "Minute to Win it" game.

Maru trying to out-balance her opponent in another "Minute to Win it" game.

We were taught (sort of) how to play Truco, an uruguayan card game. It uses a special deck of cards numbered 1-12 and may be one of the few fun purchases we make while we’re here. That is if we can actually figure out how to play.

We were just getting ready to leave when Carlos informed us that there was dessert. We sung happy birthday and ate delicious moosey cake with dulce de leche (sort of like caramel). Special thanks to Carlos and his family for organizing everything and creating a lovely evening for everyone.