The street markets are definitely where it’s at! They have fresh and yummy tasting produce out the wazoo, and it’s cheaper than the supermarket. There are no barriers closing the street from traffic, but there isn’t really room for cars to pass. Every once in a while a motorcycle rides through slowly and people just get out of the way.

At one end of the market there are people who display wares for sale. For example, today I saw that someone had a pair of jeans to sell, while someone else had some trinkets. I didn’t see anyone actually buying anything and it seems like the people might be set up there on the off chance that someone saw something they just “had to have”. It reminded me of a garage sale, but on a much smaller scale.

The produce stalls make up the majority of the market. All of the stalls seem to have very fresh produce and a much wider variety than in the supermercado. At the majority of produce stalls the sellers will hand you a plastic bag or you grab one yourself and place what you want in it; each type of item in a separate bag. They then weigh the bags; writing each total on a slip of paper to be added at the end. There was one produce stall that stumped us; the biggest one. I guess we just weren’t paying enough attention, but we walked behind the stall to the second row of veggies and grabbed what we wanted. Little did we know, but at this stall everyone is suppose to take a number and then when your number is called you tell the sellers what you want and they put them in plastic bags and weigh them. The seller didn’t seem angry when I handed him the bag with our two bell peppers and said “es todo”. I was prepared to tell him that we didn’t understand and I was sorry, but he didn’t seem to care. 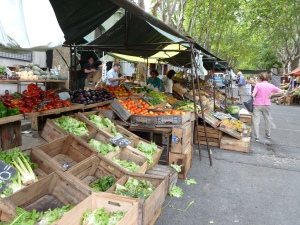 Just one of the many produce stalls!

There were two trucks that opened up to sell goods out of their sides. One was a cheese truck and the other was the local fish truck. We have been told that the fish is very good, but we were a bit too timid to try it today. 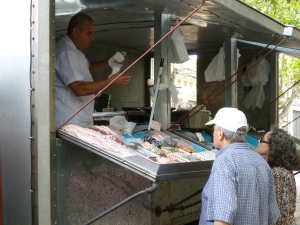 The fish man. Maybe next time we'll have the courage to try some of the fish.

The cheese truck also has an add-on of an egg-man. He sells individual eggs if you want them or in a dozen (“una docena”) and wraps them in newspaper for you to take home.

Eggs for sale! He had both brown and white eggs. We got the brown ones. The brown ones were a bit more expensive, but we figured that must mean that they're better!

All the produce is for sale in kilograms and is remarkably cheap. We got potatoes, garlic, apples, bananas, nectarines, carrots, bell peppers, onions, and eggs for $174 pesos which is about $8US.