I bought a big black duffle bag at some point in college and it’s served me quite well. It’s nice and light which makes it great for checked baggage since anything over 50 pounds tends to get quite pricey and we’re traveling for quite a while. So, anyway seemed like a good choice and I thought it would survive one more adventure. Not so.

The shoulder strap had broken back in December and I never got around to fixing it, mostly because there were four other handles by which to schlep it around and that seemed like it would be plenty. We checked it into baggage claim on the train and had our ride down. When we got in to claim our bags Randi tried to pull it off by one of the handles and it ripped straight off. At this point we noticed that the matching handle on the other side hadn’t even survived the luggage handlers on the way down. Still two handles left, that should do… 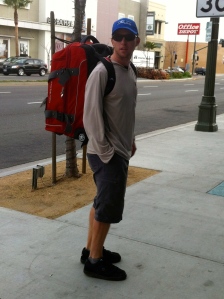 Suffice it to say by the time we got to the hotel there were no straps remaining and I had carried quite a bit in a bear hug. It seemed like it was time to find a new one that would last the rest of the trip. Staying near the airport it seemed as though this should be the mecca of luggage sales. Thought that wasn’t the case we did find a Kohl’s a bit over two miles away and trekked over to it. Thankfully, they had a pretty good selection in the store and we were able to find quite a suitable replacement. It’s a roller duffle and though it weighs more it’s quite versatile with various handles and backpack straps.

Thankfully, we had taken the early train and there was plenty of time in the afternoon to take care of this. Randi took care of that planning and kudos to her.